For my OpenGL Interactive Graphics class, I had to do a final project of my choice that used all the things we’d covered over the semester. I decided to go above and beyond the requirements and make a game that not only used all the stuff we learned, but loaded various freely available 3D models I found online for decent graphics. At least they were much better than if I’d had to draw the shapes by specifying the raw vertices, which is what we did for most of the earlier projects. Tedious doesn’t even properly describe it.

Anyway, the game I created is called “Sim Adventure Game” (original, I know). The title should give a hint as to what it’s like. It’s sort of a mix between The Sims and classic point-and-click adventure games. Elements borrowed from the former include the mood bars and the idea of satisfying your character. From the latter come the gameplay mechanic of trying to click on every possible thing, in various orders even, to try to get the best combination.

Overall, the goal of the game is to fill or empty all of your mood bars (whether to fill or empty each one should be common sense). The mood bars are affected by the various interactive objects around the 3D house interior. It is up to the user to determine which moods are affected by which objects and how fast the bars fill/empty. The game keeps a timer of how long you take to complete everything, and if you win it tells you how long it took. The objective of the game then is to finish everything in the shortest amount of time possible – I managed to do it in 82 seconds although I suspect there are faster ways. 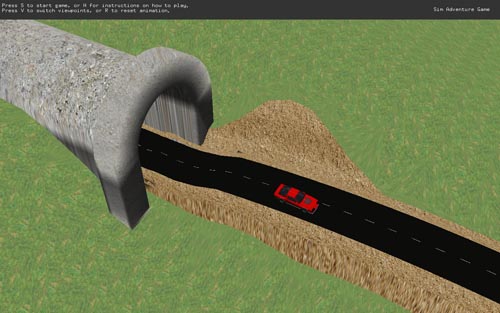 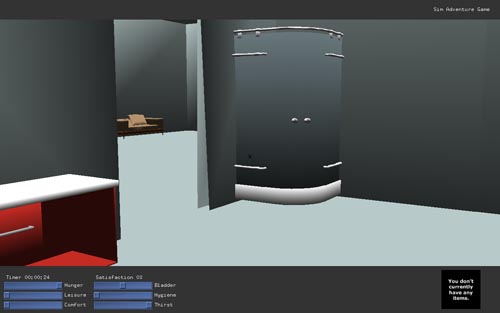 Click here to download Source Code (includes report I had to write for the class which describes much of the technical details, as well as gives references for all the 3D models and textures)